Note to Columbus Alive and The Other Paper film reviewers...

Uhhh...were you waiting for me to say something?

I'm realizing that I'm going to get to do a lot of things in the coming months that are just the kinds of things that I could see myself doing for a living, and they don't happen to have much to do with the practice of law. More of a mix of writing/publishing/journalism...all that. I still have some idea that my career should involve writing. And darn it, I have been writing! I haven't been getting paid for it, but I've been writing, and you've been reading. So there! But if I could write for a living, I could do crazy things like go on an around-the-world freighter cruise and write a novel onboard. Or I could live in a cabin in the woods of Montana...oops, that's been done, and not well. Cabin in the Alaskan wilderness! Garden apartment in Brooklyn! Hotel! Motel! Holiday Inn! I could work anywhere!

I like that Minutemen album, "Double Nickels on the Dime"!!!

You know what I want to see?

We have Bush-Kerry polls and we have Bush-Kerry-Nader polls. What about Bush-Nader and Kerry-Nader? Would it be 97-3 in either case? Or would it be more like 70-30? 60-40? Or even closer? It would be a way to get at who Nader is taking support away from other than just assuming it's Kerry (not a bad assumption, but an assumption nonetheless).

Almost certainly the greatest thing ever

"Do all your shopping...AT WAL-MART!"

Looking at the world through lawyer-colored glasses

This is a point I've been wanting to make for a long time and I wasn't sure how to get it across. I think I'll try to do it in bits and pieces.

I was walking around outside at Easton last night. I looked down at my feet as I walked and saw a grating. Suddenly I began to imagine how young a child would have to be for their feet to be small enough to fit into the grating, and what the worst possible injury they could experience would be if they got caught, and how much money the mall could be sued for. I should say, if it's not clear, that I'm not at all pleased with myself for thinking this. But...what does it mean?

I'm hoping to get lots of new 1L traffic to this site, especially to all the class notes and stuff. I'm not so sure what to talk about here, although it seems like some people are still reading. Or a few people and a lot of robots.

The top search string that got you to this site in July so far is: "Cartman"!

Coming in at number five: "Annoying"!

I have been authorized...no, ordered...to report that I will serve as the Online Editor for the new journal here at OSU, I/S: A Journal of Law and Policy for the Information Society. As a result, I will never leave the Internet again. The Matrix has me!

If you believe very strongly in the rule of law, does that mean you are opposed to any form of civil disobedience?

The cult of law

I've been made to feel extraordinarily weak-willed. I've been made to feel at times that resistance really is futile and that I will be assimilated. It's time for me to take a big step back and figure out what I want to do with my life before the law school behemoth figures it out for me.

I'm having a major "ugly law school student" moment. Did I not tell myself that I wouldn't get caught up in all the crap? Or has the crap just caught up with me?

There's a big sign in the middle of the path to Big Law, and it's pointed right at me, and it says "WRONG WAY".

Journal-invitey season is upon us! I suppose if I actually make it on a journal, it won't be like I can hide it. But in the spirit of non-competition and all that, I'll be maddeningly ambiguous about it for as long as possible!

And about my Linworth class...

Fear of a White Album

Okay, so I finally went and ordered the White Album on Amazon. This will sound weird, but I kind of used to have this complex about it. See, I didn't want to listen to it because I was scared of the part at the end of "Helter Skelter" where Ringo screams "I'VE GOT BLISTERS ON MY FINGERS!" Now, mind you, this was back when I was probably 9 or 10 years old. But I've still only ever listened to the record all the way through once and that was probably 15 years ago. It still kind of creeps me out, though...it's white all over! There's no stuff on the cover! It has weird songs like "Revolution 9"! Now, of course, I do own several albums that consist mostly of blood-curdling screams (e.g. Naked City's "Torture Garden"), and that doesn't seem to freak me out. So how big of a horrorshow could this little white recording be? I'll find out in 5-9 days!

Sometimes all this law stuff just hurts my brain. Arggh, I think. Too many words. Too complicated. Why can't we just leave it to the lawyers? What's that? I'm in what school now?

I'm getting back into the research assistant swing of things. My new string of projects has a journalistic streak to it that I think I'll rather enjoy.

Getting artsy on the sidewalk in front of the art museum

From Tony Packo's in Toledo 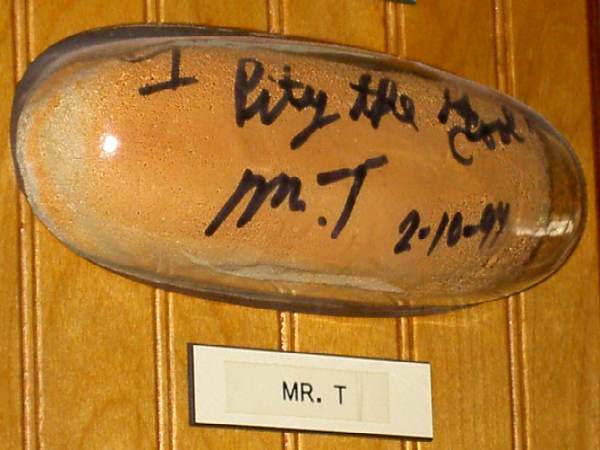 Ooh ooh! The motel in Toledo has free wireless interest access! But I'm only going to be gone for a day...and my laptop is all the way down at school. What an agonizing dilemma! Yaaaaa!!!

And I'm gonna see the MONSTER TRUCKS! Okay, don't you all get excited at once.

Another "spin the wheel" vacation...

I'm looking to get away for the weekend somewhere cheap, and I'm spinning Priceline around to see where that might be. I put in $20 for Niagara Falls/Buffalo...let's see what it says. It's going to get back to me on this.

Why are Republican states "red"? R for Republican and R for red? Because you know, traditionally, red stands for being pretty liberal...very liberal. And blue for Democratic? Blue, like blue blood? Isn't it backwards?

I have ten episodes of Mr. Show to watch on DVD. I have much Texas Hold 'Em to play on Yahoo (World Series of Poker is all that's ever on TV at the gym). I have a few beers in the house.

So why do I still feel like I've got a zillion things to do?

NBC just "definitively" announced Edwards as the running mate. The NY Post says it's Gephardt in big letters. Someone is wrong, ever so wrong!

So I'm up pre-5 AM...not furiously studying, but surveying the landscape of my fall and winter schedules, salivating over all the wonderful things I could do...I am lusting in my heart for this class to be over!

I just wanted to say that because the phrase is a quadruple-entendre this week (by my count).

T minus not a lotta time before the exam. I'm having trouble getting myself too tied up in knots over it. Once again, I feel like I know a heck of a lot more about business law than I did before I took the course, and I feel confident that I can show this is the case on the exam. I could have learned a lot more, and probably other people in the class did. But I just can't see myself getting bent out of shape about it.

In less than 24 hours...ah...sweet relief...no responsibilities for a whole...well, until I get called into service by my second professorial employer of the summer.

I think I'm going to try on some different names for size...I'm not going to change the web address yet, though...I'm just going to see how different things look.

I'm looking forward to Tuesday, July 6th at noon, which will mark the end of graded law school activities until mid-August. See, I'm trying to put a good spin on the fact that I really don't get any kind of break. I'll still be doing good stuff...it's just that I'll still be doing stuff. Well, there's always Fall Break...but not if I'm teaching. Then there's always Winter Break...anyhow, I'm hoping I can wiggle my way into a weekend trip to see my Chicago friends somewhere in there.

The blog title remains stagnant...here's another one...what about "Letters to a 1L"? "Diary for a 1L"? I figure that might remain my audience.

I'm sure I'll have lots to say about it when I'm through. I feel a little better about seeing it knowing that the profits aren't totally going to line Michael Moore's pockets...in fact, 60 percent of the profits are going to a charity of Disney's choice...interesting! If it's not clear by now: I hope Moore's goal comes to pass, but I abhor his methods.

What can babies teach us about Business Associations?

Last night, I was feeding a baby for the first time and contemplating the mysteries of life and the universe. I didn't figure out the mysteries, though, or advance my knowledge of Business Associations one whit.

Grades are all in...I'm not telling you what they are, except maybe I will on the DL if you ask nice. Now we move on to the Double Jeopardy round of law school...all grades from this point on count double!

They're good folks! Give them some business!