I've submitted 10 resumes so far to firms that have a combined total of 4,531 attorneys worldwide; I have committed up to four hours of my life to talk to them. Am I insane?

Okay, so can I count on everybody to stop talking about "flip-flops" now?

For those about to zip, we salute you

Well, so long Zipsix! Thanks for all those outlines that I downloaded just before you deleted them. Maybe I haven't been reading carefully, but I'm not sure why he's quitting. It's not like he can't afford to pay for hosting, right? Isn't he going to have a job?

Ladies and gentleman, WE HAVE A GAFFE!!!

What's that red circular ring kind of thing to the left of the stage? Is that the mud wrestling pit?

Ten things that are more interesting to me than law:

Things that are more interesting to me than law that I can make a living doing in Columbus:

More adorability! Can you stand it??? 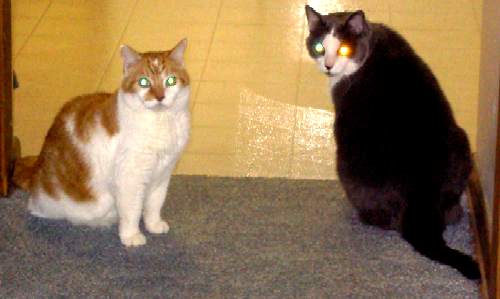 Palindromes? They are so cool! Are they as awesome as everyone says? Absolutely! Says everyone: "As awesome as they are cool?" So, are they? Palindromes!

P.S. I know I owe Jon "bread". I'm still thinking about that one.

Al Franken wants us to yell stuff at President Bush.

The "arguing both sides" thing

When I spend any time studying an issue or debate, especially if it's a small or recent one, I tend to come to a strong conclusion one way or the other pretty quickly. It really seems to me like there is one right answer to a lot of questions. It's consequently maddening to have to argue what I see as clearly the wrong side.

Which reminds me...back when I was a freshman in college and we were all reading Socrates, I was moved to such heights of righteous indignation that I stood in front of the law school, shook my fist, and yelled: "SOPHISTS!!!" Or, at least I thought about doing it.

Got it. Here you go:

Was anyone else ever taught that the words "weather" and "whether" were supposed to be pronounced differently? I have a memory, long faded by time, of being told by an elementary school teacher that when you say a word that starts with "wh" like "whatever", you should blow a little puff of air when you "wh". I hadn't thought about this in a very long time, and I certainly have never spoken this way. Strangely enough, Merriam-Webster actually confirms multiple pronunciations for the word in question, including the whispery, wheird and whacky "wh"!

To go along with the little-seen advice column feature, here's a new one: "Hey Mike, Say Something About..." This consists of you adding a comment to this or some other post, asking me to say something about something. My goal is to say something funny, unless you pick a serious subject. The prompt for my saying something could be a single word, like "celery", or a whole concept, book or web site. It's up to you. Then I have to say something. But my response isn't guaranteed to be any particular length or guaranteed to be funny. It will include at least one word, and may include images or other audiovisual aids. So if you said: "Hey Mike, Say Something About...Celery!" I might say: "Crunchy." That's what I would say especially if I have a paper due soon or something like that.

Has a sitting Supreme Court justice ever been a party in a civil suit? Did the justice go pro se? If not, did the justice have to pay to be represented, or were lawyers falling over each other to do it for free?

They all hate us. 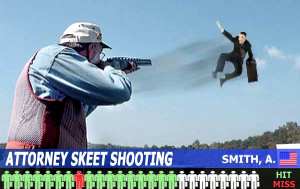 Er...pardon my ignorance. A cursory web search reveals that "cocoa puff" refers to smoking marijuana laced with cocaine. Needless to say, I do not approve of this activity. However, I do approve of eating Cocoa Puffs cereal (in moderation).

Apparently, Nelly is going to pull a "Use Your Illusion" next month by releasing two different albums on the same day, "Suit" and "Sweat". I thought this guy's first single and video ("Country Grammar") were outstanding. Not the version about shooting people, but the clean version about Cocoa Puffs and whatever. And the video that just showed regular people doing regular stuff and having a good time was a real breath of fresh air. Since then, though, not too impressed. But this Axl-esque move is full of guts. Then again, look how Axl ended up.

And M.C. Hammer is back! Sort of...he's back on VH-1, at least. There was this video billed as "M.C. Hammer featuring..." and then like three or four other guys. So they showed Hammer for about 30 seconds at the beginning and he did one verse and then he simply disappeared! What's more, he put people who can actually rap well on the track! So, basically, he made a cameo appearance in his own video! Very weird. 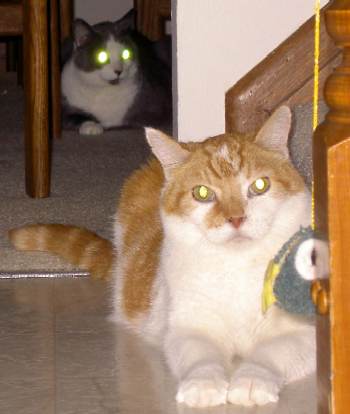 Schroeder's doing the alien cat staredown...no, this photo was not retouched...

I just realized that at least one of the big law firms I'm thinking about interviewing with has defended a tobacco company. It could be that all of them have. Could I stomach working at such a place?

Observing the 1L in its natural habitat

They look just like us...except I've never seen them before in my life!

And...I'm done already! Except for the fact that I have to take a whole LSAT to prepare for my last class tonight.

The Reserve Room in the library is your friend! Before you go running off and buying all these outlines and treatises and stuff, you can look through many of them in the library and try using them to see what you think. For example, you'll probably want to look at Prosser & Keeton once in a while for Torts, but you probably won't want to actually buy the treatise.

On the other hand, Glannon's Civ Pro ("The Glannon Guide" and/or "Examples and Explanations") and Torts ("E & E") books are pretty darn near essential and awesome.

If I'm going to be Online Editor of anything, I should probably have a more professional looking main web page. No more Bastille.

It's hard to believe that there are only four days standing between me and new classes. They seem like such a low priority at this point. I'm getting nutty over my research project and I'm chomping at the bit to get I/S online. But classes? School? Nah...

You know who I like talking to on the phone? Customer service people. If you're even the slightest bit friendly to them they're so appreciative. Just saying "thank you, you've been very helpful and answered all my questions" totally makes their day!

You know who I don't like talking to on the phone? People whose job isn't to talk to people on the phone and who seem like they'd rather be doing something else. If I was them, I'd feel the same way, and I feel like a total heel for taking up their time. Yerg...not my favorite.

You might not want to ask 2Ls for advice. Especially not at the beginning of the year. What with one thing and another they're probably in a bit of a state. Try a 3L or a friendly neighborhood alumnus a few years out who has some perspective.

Not that I'm not going to give y'all advice if you ask for it. I love giving advice! It's like being given a license to rant and ramble, which is a fine gift indeed!

I wonder if there are any people who talked to me last year because they thought it looked like I knew what I was doing who won't talk to me anymore because I'm not on the main journal. That would be somewhat along the lines of sad or pitiful.

In case you didn't know, here is some of the stuff that you can expect to hear about in my upcoming second year of law school:

I 'spose it's been a while since I've talked about any law school stuff. But give me a break, I'm not in school right now! But in less than two weeks I'll be back, and you should find me in rare form. I hope you've enjoyed looking at cats in the meantime.

I can't believe that I decided to sign up as a grad student at-large at OSU for Winter Quarter 2003 and take Linear Algebra. I mean, Linear Algebra?! Well, it would have been useful if I'd done the Econ Ph.D. that I'd been considering. But in hindsight it seems like a really weird thing to do.

Things that seemed really important to know when I was a kid but turned out to be totally irrelevant:

Things that might have seemed unimportant at the time but that I'm glad I know:

Here's the new kid in school... 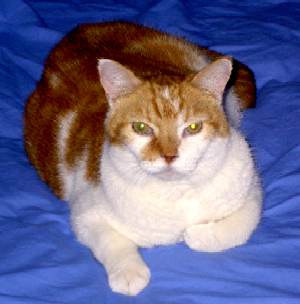 Cats of a feather

My main man Schroeder (pictured below) is getting a new little friend (not pictured yet)! He hasn't had any cat friends since we adopted him from a house where he lived with his mama and brothers and sisters. But now, local cat-about-town Joey will be shacking up with Schroe at my mom's house and we have high hopes that it will be a good match. Joe and Schroe! Schroey and Joey! 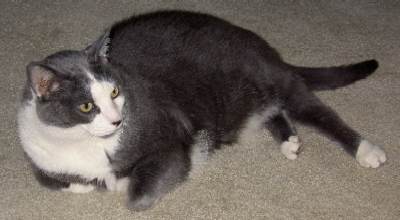 Also, by way of clarification, this website does not in any way endorse Wal-Mart or any other retailer, except for Big Lots!, which is, in fact, the official retailer of this web site.

They're good folks! Give them some business!